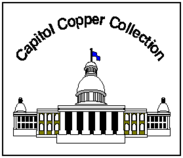 The "Capitol Copper Collection" was created from copper that was once part of the roof of the Iowa State Capitol. This copper is over 100 years old. In 1983, exterior restoration work began on the State Capitol Building in Des Moines. The cause was the crumbling blue stone that adorned the base of the roof. In order to remove and replace the stone, the copper roof needed to be taken off to expose the stone.

Over a hundred years ago, when the Capitol Building was constructed, the method for sealing the copper roof was to melt lead and place it in the seams. Tar was also used to seal some of the roof. Now that the roof had been taken apart, the trick was to reseal it. In this regard, a copper roof is just like a big piece of plumbing: once heat is added to one section to reseal it, typically another section breaks loose. The difficulty of resealing as well as the concern about lead poisoning prompted the decision to replace the old roof with new copper and modern seaming techniques.

Bob likens the copper to buying beef on the hoof, "it is not all useful meat." Not all the copper is usable, with the lead and tar, but there is enough to make some wonderful pieces of art to be enjoyed by many. A significant added value to this copper art work is the historical perspective. It gives the art collector the opportunity to hold and own a piece of Iowa History.

To get in touch, please use my online form or call